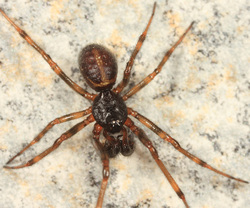 Cobweb Spider
Cobweb Spiders
The web building habits of cobweb spiders contribute to their pest status. These spiders typically construct an irregular web in sheltered sites indoors or outdoors. The outer sticky threads of the web entangle insect prey. These spiders often are inconspicuous, although their web is not. Some species construct a retreat within the web and hide therein during the day, and the spider hangs upside down in the center of the web at night. Cobweb spiders, including widow spiders, belong to the family Theridiidae and have a rounded globular abdomen (black widow spider shape). One member of this family, the common house spider (Achaearanea tepidariorum) is about 1/3 inch long (female), gray to brown, and its spherical abdomen has several dark stripes near the tip. The common house spider requires high humidity and plentiful prey; it typically occurs in damp basements, cellars, crawl spaces, and outbuildings. This species frequently abandons webs that do not yield prey, and then constructs new ones until it finds a productive site. Webs become dust covered when abandoned. 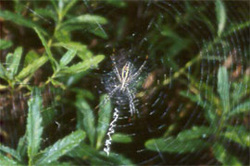 Orb Spider
Orb Weaver Spider
Orb weaver spiders construct the familiar circular, flat, elaborate web in which flying insects are trapped. Each species of orb weaver typically constructs a web with a distinctive design. Webs usually occur outdoors. These spiders have poor vision and locate their prey by feeling the vibration and tension of the threads in their web. They use silk to wrap the victim. Many species of orb weaver spiders are large (approximately 1 inch), but others are quite small (approximately 0.1 inch). Some have oddly shaped abdomens (pointed spurs, conical tubercles, etc.). Some are very brightly colored. One common spider, known as the yellow garden spider (Argiope aurantia), has silver hairs on the back of the cephalothorax and a large abdomen marked in black and bright yellow or orange. This spider is about 1 inch long and hangs head down in the center of the web, which is found in brambles, bushes, tall grasses, etc. in open sunny places. Despite their formidable appearance, orb weaver spiders are not considered dangerous. Some species can bite if handled. 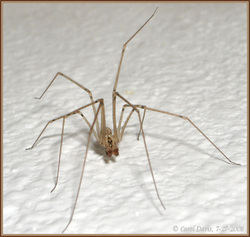 Cellar Spider
Cellar Spider
Cellar spiders are frequently found in dark, damp places such as cellars, basements, crawlspaces, and outbuildings. They typically construct a loose, irregular-shaped web in a dark corner. Cellar spiders continually add to their web, which can result in extensive webbing. The male and female live together in a web and can be found hanging upside down in it. They shake the web violently when alarmed. Cellar spiders can quickly establish large populations in a structure. Cellar spiders have very long, slender legs (up to 2 inches long). Their body is about 1/3 inch long and pale colored (whitish-yellow to gray). They are sometimes confused with daddy-long-legs. 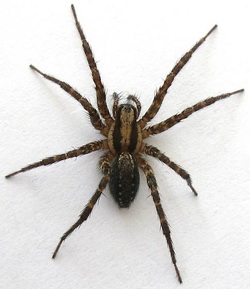 Funnel Web Spider
Funnel Web Spider
Funnel web spiders construct large, flat, horizontal webs of nonsticky silk. The web contains a funnel at one end that serves as the spider�s retreat. The funnel is open at both ends so the spider can readily escape. The spider hides at the narrow end of the funnel; when it feels the vibration of an insect crossing the web, it dashes out, bites the insect, then carries it back to the funnel. In former times, the silk of funnel web spiders was used to cover wounds to stop bleeding. Funnel web spiders generally are brown and somewhat large (>1/2 inch long). Some species have banded legs. Some species have long spinnerets that extend out beneath the rear of the abdomen. In the family Agelenidae, some species of Agelenopsis (grass spiders) and nonnative Tegenaria (house spiders) will infest structures, but their webs typically are confined to the lower levels. The hobo spider, Tegenaria agrestis, was introduced from Europe and is found in parts of the Pacific Northwest. The hobo spider is known to bite humans, and its venom has similar effects to that of the brown recluse spider. Hobo spider bites are probably from the males, which wander in search of female mates. The bites of other funnel web spiders are not known to be very toxic to humans. 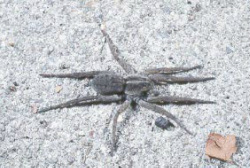 Wolf Spider
Wolf Spider
These hunting wolf spiders are fast runners that will chase their prey. Wolf spiders are hairy and often large, up to 1-3/8 inches long, sometimes confused with tarantulas. Their legs are long and spiny. Many are dark brown. Wolf spiders may hunt day and night. They usually occur outdoors, but may wander indoors in search of prey. They tend to stay at or near floor level. They typically construct web retreats in sheltered sites. Females carry their large, globular egg sac attached to spinnerets under the abdomen. Upon hatching, the spiderlings climb onto their mother�s back and stay there several days or more before dispersing. Wolf spiders frequently alarm homeowners because of their large size and rapid movements. Wolf spiders are not aggressive, but may bite if handled. 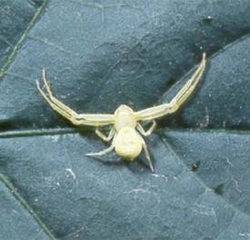 Crab Spider
Crab Spider
These crab spiders are so named because of their jumping ability. They can jump many times their own length. They make quick, sudden jumps to capture prey or avoid a threat. They also can walk backward.These common spiders are about 1/8 � 3/4 inches long, very hairy, stocky built, and short-legged. Two of their eight eyes are very large. They have the keenest vision of all spiders. Many species have patches of brightly colored or iridescent scales. Some are black with spots of orange or red on the upper surface of the abdomen, at times confused with black widow spiders. Jumping spiders are active during the day and prefer sunshine. They normally live outdoors, but jumping spiders can become established indoors and their hunting activities often center about windows and entry doors where their prey is most common. 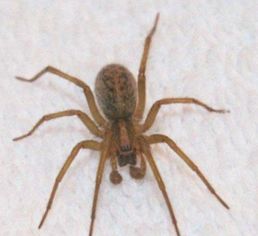 The Hobo Spider
The hobo spider is one that more people need to be aware of. They are the real cause of countless so-called "brown recluse bites." The brown recluse is often wrongfully blamed because both species look related at a glance, and their bite patterns and symptoms are similar. But a second look at these critters can identify them in minute's time. Hobo spiders, unlike brown recluses, have a mottled coloration and distinctive 'herringbone' patterns on their abdomen. Their legs are also hairier than those of the brown recluse.
The easiest way to differentiate brown recluses from hobo spiders is by geographic location. The hobo spider was introduced to the Port of Seattle from Europe in the late 1920s, and they have since spread throughout the Northwestern United States and Western Canada. Brown recluses do not live in the Northwest or Canada. The hobo spider has a nice list of natural predators, particularly the crab spider, Pardosa wolf spider, and again our friend the jumping spider.

Hobo Spider Bites
Purported hobo spider bites have had symptoms similar to the bites of brown recluse spiders, though no fatalities have been reported. In fact, scientists debate whether this spider's venom can cause the necrosis of human tissue at all. The research is murky because most people who report bites do not capture the spider, so experts have not been able to identify whether the hobo spider is actually associated with dangerous bites. If bitten, it is imperative that the spider be captured or preserved as entirely as possible, and then sent to a lab (many state universities have labs that are appropriate for this) to aid in identification and future research. 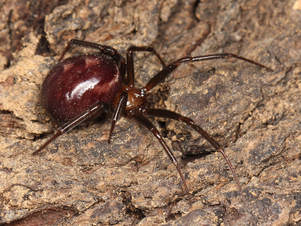 Brown House Spider
Like black widows, the female S. grossa is 6-10.5 mm in length and dark colored with a round, bulbous abdomen. Typical coloration ranges from purplish brown to black, with light-colored markings. Unlike black widows, redbacks, and other Latrodectus species, S. grossa does not have a bright red hourglass pattern or any other bright markings. Like many spiders, the male is sometimes smaller but can many times be nearly as long as the females. It measures 4.1-10.0 mm in length and is thinner than the female. The two sexes are colored similarly; however, the sexually mature male almost always has lighter, more reddish-coloured legs than the female. S. grossaspiders may shed up to six times (instars) before reaching maturity. They can go several months without feeding, provided they have access to water. A well-fed female can lay three or more egg sacs each year. Each egg sac typically contains between 40-100 eggs. The mother can often be observed watching her eggs for hours, even days, at a time once the eggs start changing color and grow close to hatching. At normal household temp/humidity, an egg will usually hatch within a month of being laid. The spiderlings are independent from time of hatch. Female S. grossa spiders can live up to six years; the typical lifespan for the male is 1-1.5 years. Males often die shortly after mating. As is common with other members of the family The ridiidae, S. grossa constructs a cobweb, i.e. an irregular tangle of sticky silken fibers. As with other web weavers, these spiders have very poor eyesight and depend mostly on vibrations reaching them through their webs to orient themselves to prey or warn them of larger animals that could pose a danger. They are not aggressive, and most injuries to humans are due to defensive bites delivered when a spider gets unintentionally squeezed or pinched. It is possible that some bites may result when a spider mistakes a finger thrust into its web for its normal prey, but ordinarily intrusion by any large creature will cause these spiders to bite. A related species, commonly found in North America, is Steatoda borealis. This spider is similar to S. grossa in shape, but slightly smaller, and is generally found in colder climates. This spider can be identified by colored markings on the dorsal side of its abdomen rather than on the ventral side.