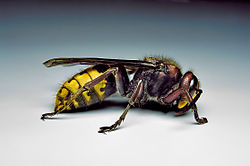 European Hornet the Cicada Killer
European Hornet
The European hornet Vespa crabro, commonly known simply as the "hornet," or "bell hornet" in the mid-Atlantic region of the United States, is the largest European eusocial wasp, and the largest hornet in North America. The queen measures 25 to 35 mm (1–1.4 in)long; workers are 18–24 mm. In males, as in most members of the Aculeata, the antennae have 13 segments, while in females there are only 12; also as in other aculeates, the male abdomen has seven visible segments, while the female has six; females possess an ovipositor modified into a sting which is not barbed. See wasp and bee characteristics to help identify similar insects.
European Hornet Identity and Activity

Bald Face Hornet
Bald Faced Hornet
The bald-faced hornet actually belongs to a genus of yellowjackets in North America, but unlike many congeners it lacks yellow coloring. Instead, it is called a hornet in the American sense of a wasp that builds paper nests. It is large compared to other yellowjackets, with adults averaging 2-3 cm long. It is sometimes confused with the similar-sized European hornet, the only true hornet in America, but is distinguished by its mostly white "baldfaced" head and three white stripes on the end of its abdomen.
Bald Faced Hornet Hives and Activity

Yellow Jacket
Yellow Jacket
Yellow jacket is the common name in North America for predatory wasps of the genera Vespula and Dolichovespula. Members of these genera are known simply as "wasps" in other English-speaking countries. Most of these are black and yellow; some are black and white like the bald-faced hornet, Dolichovespula maculata. Others may have the abdomen background color red instead of black. They can be identified by their distinctive markings, their occurrence only in colonies, and a characteristic, rapid, side to side flight pattern prior to landing. All females are capable of stinging. Despite having drawn the loathing and fear of humans, yellow jackets are in fact important predators of pest insects.
Yellow Jacket Queen and Hive Activity 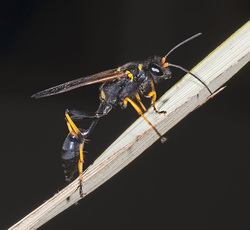 Mud Dauber Wasp
Mud Dauber Wasp
Mud dauber (sometimes called "dirt dauber," "dirt digger," "dirt dobber," "dirt diver", or "mud wasp") is a name commonly applied to a number of wasps from either the family Sphecidae or Crabronidae that build their nests from mud. Mud daubers are long, slender wasps about 1-inch (25 mm) in length; the latter two species above have thread-like waists. The name of this wasp group comes from the nests that are made by the females, which consist of mud molded into place by the wasp's mandibles. Mud daubers are rarely aggressive and stings are very uncommon.
Mud Daubers Wasp Construct Nest around Structures 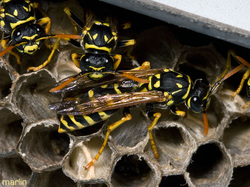 Paper Wasp and Nest
Paper Wasp
Paper wasps are 0.7 to 1.0 inch (1.8 to 2.5 cm)-long wasps that gather fibers from dead wood and plant stems, which they mix with saliva, and use to construct water-resistant nests made of gray or brown papery material. Paper wasps are also sometimes called umbrella wasps, due to the distinctive design of their nests or other regional variants such as Trinidad & Tobago's use of Jack Spaniard.
Paper Wasp Nest and Larvae around Structures 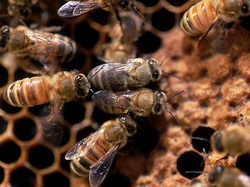 Honey Bees
Honey bees (or honeybees) are a subset of bees in the genus Apis, primarily distinguished by the production and storage of honey and the construction of perennial, colonial nests from wax. Honey bees are the only extant members of the tribe Apini, all in the genus Apis. Currently, only seven species of honey bee are recognized, with a total of 44 subspecies, though historically, from six to 11 species have been recognised. Honey bees represent only a small fraction of the roughly 20,000 known species of bees. Some other types of related bees produce and store honey, but only members of the genus Apis are true honey bees. The close relatives of modern honey bees—e.g. bumblebees and stingless bees—are also social to some degree, and social behavior seems a plesiomorphic trait that predates the origin of the genus. Honey bees living within a building do not cause structural damage, though if abandoned, their waxy comb and honey will melt and foul wall board, siding, and insulation. Occasionally, foraging bees may enter rooms of a building rather than using their outside entrance.
Honey Bee Structural Damage 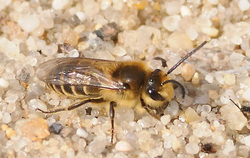 Ground Bee
Ground Bees
Ground bees become active in early spring. These bees dig nests in the ground, often in bare patches of the lawn or garden. If you find mounds of soil, similar to anthills but with larger openings, these may be ground bee nests. Watch for bees flying low over the ground and entering their burrows. First and foremost, ground bees are beneficial insects that perform an important role as pollinators. Ground-nesting bees include the digger bees (family Anthoporidae), sweat bees (family Halictidae), and mining bees (family Andrenidae). Females excavate a nest in dry soil, and mound the loose soil around the nest entrance. She provisions the nest with pollen and nectar for her offspring. Ground bees are solitary bees. Each female digs and provisions her own burrow. However, it's not unusual to find dozens of ground bee nests in one area if conditions are suitable for nesting. Males may fly over the burrows, patrolling for potential mates. Female ground bees can sting, but rarely do. Ground bees are not aggressive. However, they will sting in defense if threatened. Males of some species may behave aggressively around nesting areas, but they lack a sting. Sweat bees do have a somewhat startling habit of landing on people to lap up the perspiration from their skin; this behavior is, in fact, why they are called sweat bees. Should you swat at a sweat bee when it lands on you, it may sting you in self-defense.
Ground Bee Identification and Activity 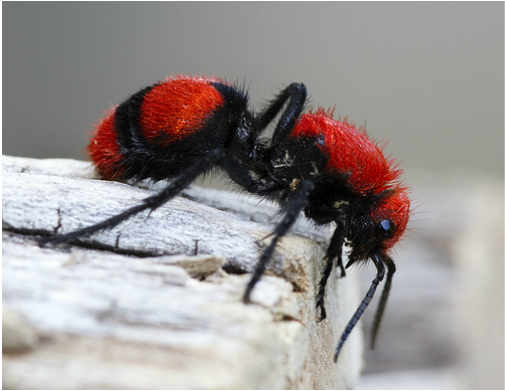 Velvet Ants
What appear to be small wingless bumblebees having reddish to whitish hair are sometimes seen wandering about on the trails. While called velvet ants (see also Sacken’s Velvet Ant below) because of their appearance, they are actually female wasps in one wasp family. The males, which have wings, are seldom seen. Don’t handle these insects, for they can give a painful sting.Sacken’s Velvet Ant (Dasymutilla sackeni)
Adult: Female 18 mm
Male 10 mm
Order Hymenoptera/ Family Mutillidae – Velvet Ants
Females are wingless, the males winged. This species is most common on the dune areas at the Reserve. Clad with long hairs, like dune insects in general, this creates an air space around the insect should the sand cave in upon it. This helps the insect to better free itself and also protects the body from the abrasion of the sand. Sacken’s Velvet Ant is parasitic on a number of types of bees and wasps, but is often seen to enter the burrows of sand wasps, Bembix spp.. The integument of Mutillid wasps is so hard that it is very difficult to pierce them with a steel insect pin. With such armor they are well protected from the stinging insects which they attack, and are also provided with a severe stinging ability for any potential predators. Range for this and the following species is throughout most areas of the state at lower elevations where there is suitable habitat.
Red-haired Velvet Ant (Dasymutilla coccineohirta)
Adult: Female 11 mm; Male 7-8 mm
The Red-haired Velvet Ant is most commonly seen along dusty or sandy paths at the Reserve. Host preferences are little known. Do not pick up Mutillids, the sting is memorable! 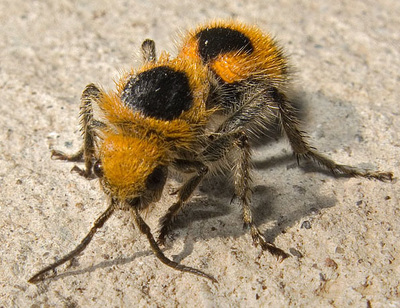 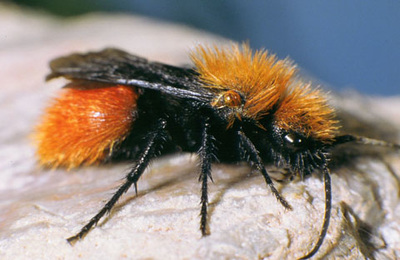 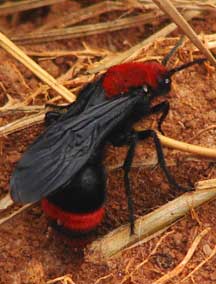 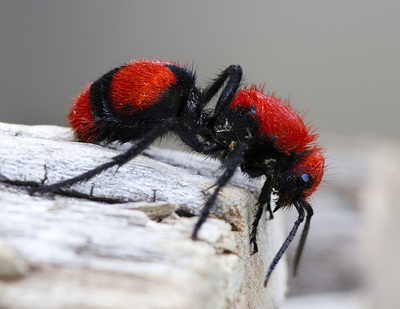 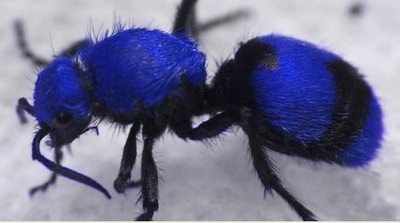 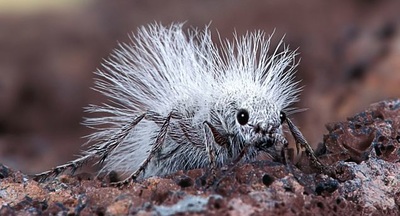